This is a post in a series about problem based instruction in fourth grade — centering on a series of lessons classroom teacher Claire* and I taught about symmetry. This is part 3. (Part 1/ Part 2)

To launch the series of lessons, we used a series of tasks from Illustrative Mathematics (available as part of their the “free resources”  on the content standards, not their upcoming K-5 curriculum). We continued the following day two tasks from the IM website that contextualized symmetry in fourth grade work about geometry and the attributes of different shapes.

As Claire and I planned, we kept in mind the “five equity-based mathematics teaching practices” from The Impact of Identity in K-8 Mathematics: Rethinking Equity-Based Practices by Julia Aguirre, Karen Mayfield-Ingram, Danny Martin (NCTM 2013)

In order to go deep with the mathematics, the lesson can’t just be a “one off” — a lesson that stands isolated from the other 179 math lesson for the year.

“It’s like those one time PD sessions,” Claire mused. “Sometimes I walk away with a good idea, but it’s often not that meaningful. I just… walk away.”

There’s lots of research about the effectiveness of short, one-shot workshops — or, rather, the lack of effectiveness. Many leaders are transitioning to more sustained, embedded professional learning experiences.

So why do we sometimes teach standards in the same isolated, one-shot way?

In many fourth grade classrooms, symmetry is an orphaned standards. Teachers will stand in front of the class while they define symmetry, and model how to prove a line of symmetry. Students then spend a day — maybe two? — practicing the skill of finding lines of symmetry. Students with strong spatial awareness may find it easy to do, while others find it challenging. It doesn’t particularly matter; it’s over in the blink of an eye.

With problem based learning, Claire and I wanted to center the mathematical experiences on the students’ ideas and development.

Problem-based instruction means believing all students can solve problems on their own and giving them a chance to try.
– William McCallum, “What Is Problem Based Instruction?”
published on the Illustrative Mathematics blog on February 19, 2019

On the first day of symmetry, students had constructed a definition of what it means to have a line of symmetry, and explored some examples with novel shapes. Now we wanted to link back to students’ understandings about the properties of geometric figures, like triangles.

From “Lines of Symmetry for Triangles,” Illustrative Mathematics

On the previous day, students had physically manipulated shapes — cutting and folding — to prove lines of symmetry. Now, students had additional information about the side lengths. Would they use this information to help them?

For our warm up, we used a problem string about the equal sign.

After launching the triangle task, Claire and I observed students at work, and conferred with them individually and in pairs. Some students, like the one below, were still trying to use the folding strategies from the day before.

We noticed other students tracing the triangles onto another sheet of paper. A handful of students were starting to pay attention to the side lengths and the attributes of the triangles.

I couldn’t tell exactly what Giselle was doing, so I crouched down next to her to chat.

Giselle projects confidence in math class. She participates in several extracurricular math classes, and so she has a lot of experience before we start any given unit. She has a great command over mathematical vocabulary that other students think of as nitpicky. (“This is a scalene triangle,” she was quick to tell me.) She raises her hand quickly, and gently rolls her eyes when someone in the class — including the teacher — states something that she would classify as ‘painfully obvious.’ Giselle is also curious, and kind towards others, and deeply analytical. I looked forward to hearing what she had figured out about this triangle.

Giselle sighed at my question, but answered. “All of the side lengths are different. One is 2, one is 4, and one is 5. Are these centimeters?”

“What do you think?”

“I agree. It seems more likely than that side being 2 inches, right?”

“Sometimes diagrams are just symbolic, too. Like maybe this represents two yards, and it’s a scale drawing,” I suggested. Although we were tiptoeing into 7th grade content, I knew that Giselle had a lot of experience with formal mathematics. She nodded again, and we continued.

“Do you think it has any lines of symmetry” I pressed.

Giselle bit her lip. “It’s… scalene.” She sounded defeated. She clearly thought that she was supposed to already know this. However, the key to problem-based learning is sensemaking. Experimenting. She was off to a good start, activating some prior thinking, but she seemed stuck.

I paused to think of a way to nudge Giselle’s thinking. I wanted to push her forward without giving her ideas to mimic.

“I notice you drew some lines. Are those lines of symmetry?”

Giselle’s breaths were sounding more shallow. “I don’t… I don’t know. No? They don’t look like it? But I don’t know how to tell for sure,” she stammered.

“What about this one? Let’s freeze on that one, and think about what we know. You talked about how the triangle is scalene because of the side lengths. Do you think it’s a line of symmetry?” 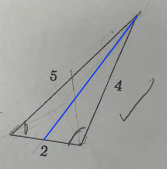 She stopped. “Well, on one side it’s 5, and on the other side it’s 4….” As much as I try to maintain a neutral expression, I think my eyes betrayed hints of a smile. Giselle was onto something.

“Oh, and the angles are different, too. Like these ones. One of them is obtuse and one of them is acute. If it’s symmetrical, can they be different kinds of angles? No… wait… I’m probably wrong.”

I was disappointed. I hadn’t heard anyone else talking about the angle measures in order to determine a line of symmetry. I pushed her to talk about why she didn’t want to share.

I had to respect her wishes, but I also was not sure if anyone else had uncovered the connection to angle measurement, and Claire had already signaled to the class that we would be reconvening in the meeting area in one minute. It was time for me and Claire to compare notes about who would share.

“Is it okay if I share your thinking, without using your name?” I asked. “I won’t let anyone know. We won’t use your paper or anything.” I was hoping that she would see that, in taking this risk, she could show how brilliant she was in making sense of things, not just in repeating back what she had learned elsewhere. She agreed to this plan, with clear reservations.

Claire and I selected three student ideas to share. Sara and Avi would come up to projector to share their ideas, and I would share Giselle’s anonymously. We sequenced them deliberately, a lá the Five Practices for Orchestrating Classroom Discussion, from most familiar strategy (folding the paper) to least familiar (using side length and then angle measure).

Sara showed how she had cut the triangles out of a separate sheet of paper.

“I didn’t know we could ask for more papers!” Ezra lamented.

“I got it out of the recycle bin,” Sara stated proudly. Resourceful.

She showed how she was then able to use the strategy that most students had used yesterday: folding down the halfway point to see if the two sides match, like mirror images of one another. For the equilateral triangle, they did. For the scalene triangle, they didn’t: three times.

“There are three angles, so I had to try it three times,” Sara shared. I was thrilled that she had added in this comment, because it showed how she was attending to the features of the triangle even with the folding strategy.

Next Avi shared. He asked Claire to draw the lines for him using a ruler. He wanted everything to look precise. (Or maybe he didn’t want to everyone to see that he’d had to try this out a few times on his paper.)

“See how the bottom line is cut into 1.5s,” Avi said. “And both of the other sides are 3. They’re the same, so that’s one line of symmetry.”

Then he asked Claire to draw another line, starting in the bottom left corner and extending halfway across the right side.

“See, now the right is cut into 1.5s, and the other two sides are both 3. So there’s another line of symmetry. It works if you start in the other corner, too.”

Claire helped add onto his thinking. “So each of these lines slices the triangle exactly in half, and each half will have these three identical side lengths.” She indicated them. “Because they have the same dimensions, but are mirror images of one another, this shape is symmetrical. There are three lines of symmetry.”

Next up was Giselle’s thinking about the angles.

“Like Sara, this student was thinking about the number of angles. They’re feeling a little uncertain about whether this idea works, so let’s test it out together. Let’s compare these two angles, on either side of the halfway line. What do you notice?” I threw this question out to the whole class.

Students shared that one is acute and one is obtuse. At least four students looked like they had metaphoric light bulbs going off over their heads.

“Ohhhhh!” Arjun called out. “So it can’t be symmetrical! The angles would have to look the same! Maybe they’d have to be both right angles!”

“But then the triangle will have no tip!” Giselle chimed in. “The lines would go straight up forever. Maybe they could both be acute.” She had so much more confidence when she was building off someone’s idea. Was that a smile?

Students agreed that this meant that that was definitely not a line of symmetry, and that even the cut that would make for two acute angles didn’t look like a line of symmetry. “They’re both acute, but they’re not the same at all. One is way pointier,” Sara offered.

Through this discussion, we were able to go deep with the mathematics, and make connections to previous learning about geometry. All three students who shared felt affirmed in their identity as a mathematician, as did some of the other students who were able to built off and engage with their classmate’s work.

Originally, Claire and I had planned to go straight into the next task. We anticipated that, after the class discussion, students would have new ideas about how they could engage with ideas about symmetry without having to cut and fold.

Of course, we also thought that this entire task and follow up group conversation would take less than 20 minutes, and we were wrong about that. We had to save the next task, about quadrilaterals, for the following day. You can read more about that in our blog post on lesson 3.

*In my blog, I use pseudonyms for all students, and most adults. ‘Claire’ helped choose her pseudonym.