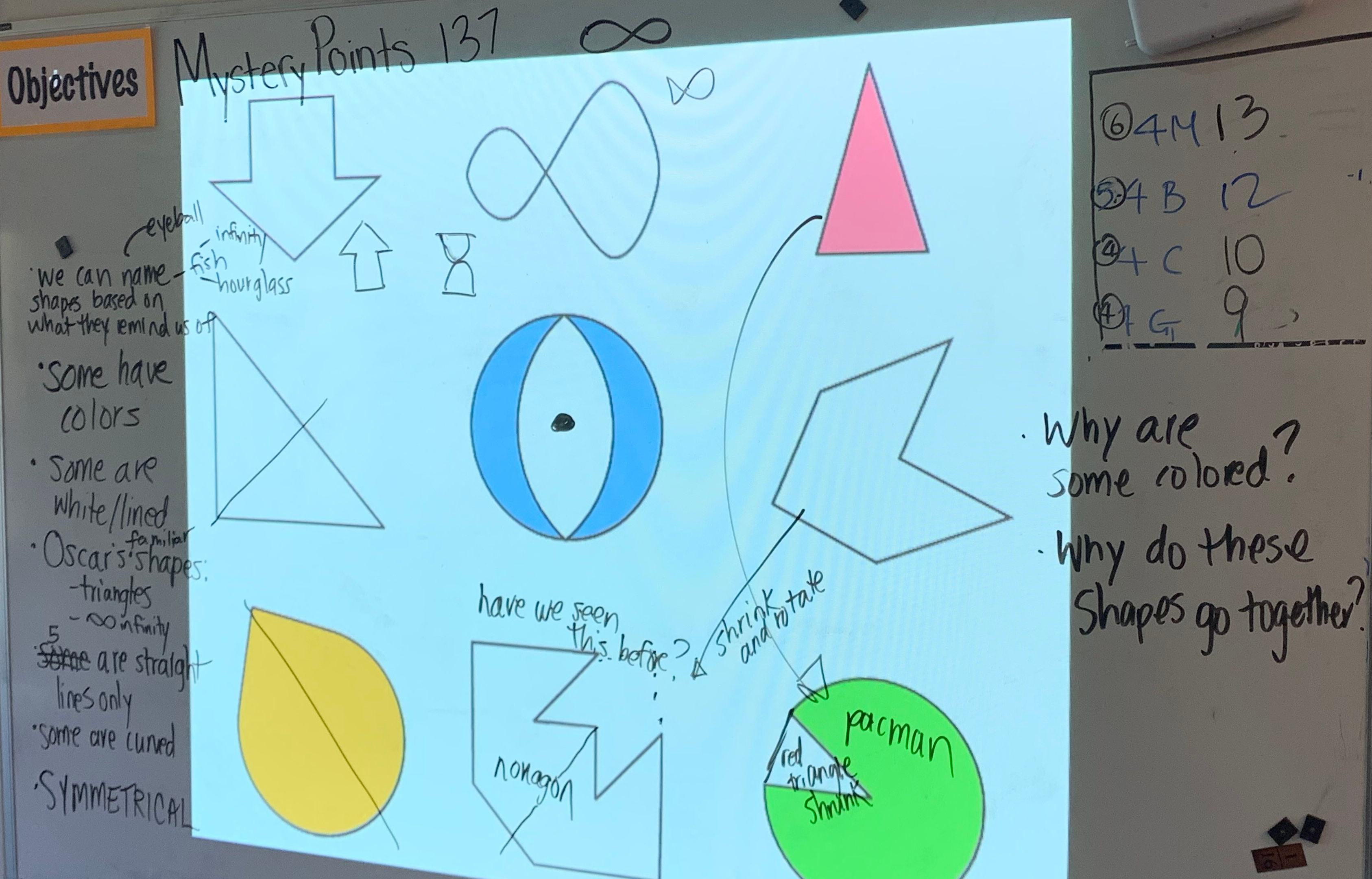 This is a post in a series about problem based instruction in fourth grade — centering on a series of lessons classroom teacher Claire* and I taught about symmetry. Part 1 was published on Monday, January 6.

Where do we begin?

We decided to use the first task on the Illustrative Mathematics free content standards, “Finding Lines of Symmetry,” for day 1 of our symmetry mini-unit. There were three parts: one with some unfamiliar shapes, the next with shape composed out of rectangles, and the third with a cross.

Since we were using this to launch our series of lessons, we wanted to pay extra attention to opportunities for students to access this content, especially knowing that some students will have more experience working with lines of symmetry than others.

Planning with Equity in Mind

As we planned, I kept in mind the “five equity-based mathematics teaching practices” from The Impact of Identity in K-8 Mathematics: Rethinking Equity-Based Practices by Julia Aguirre, Karen Mayfield-Ingram, Danny Martin (NCTM 2013)

In looking at this task, Claire and I could already see ways that we could leverage multiple mathematical competencies. 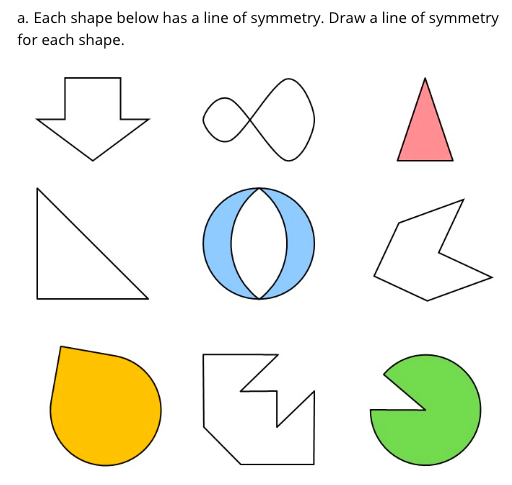 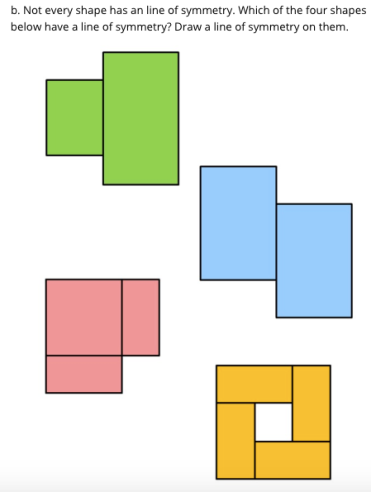 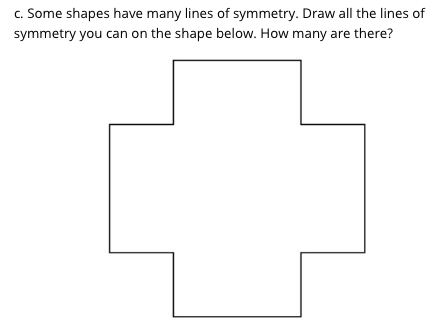 “Some students might try to fold the paper, or hold it up to the light,” Claire suggested. “That’s usually what I see kids do. You know. Hands-on.”

“I guess some might feel like they ‘just know’ where the line of symmetry, using intuition. And maybe others might pay attention to specific features, like the angles… since you just worked on geometry,” I said.

Both of us wondered how they would interact with shapes that “felt” like there must be a line of symmetry, like the yellow one composed of rectangles, but actually do not.

This shape has rotational symmetry, but no lines of symmetry.

But how to launch the task? I thought that coming out and using the word ‘symmetry’ in the first minute would activate learning for some students, and alienate and confuse some others, especially the large group of students who are new or relatively new to the English language.

We decided to employ the instructional routine “I Notice/I Wonder.”

*Notice and Wonder and I Notice/I Wonder are trademarks of NCTM and the Math Forum. Many thanks to all of the educators that have taught me the power of this routine — most notably to Max Ray-Riek (@maxrayriek).

In this routine, a teacher shows students some media or a mathematical representation. We would be revealing the first image in the task.

The teacher then asks, “what do you notice? What do you wonder?”

Students are then given quiet think time to think about what they notice or wonder about the prompt. We have students use a quiet signal (e.g. thumbs up resting on chest) when they have something to share.

Students then have the opportunity to share ideas. Usually, the teacher guides the conversation towards an inquiry that will push the class forward mathematically.

I notice and wonder…

Claire and I displayed the first visual prompt, with the written part removed, 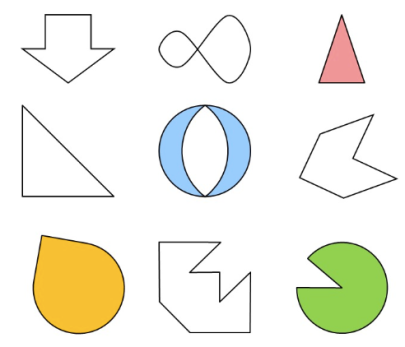 We wanted to get students talking — talking about symmetry, but also just talking about other mathematical observations that would contribute to a positive classroom environment.

Like in every classroom, there are a few students in Claire’s classroom that do not see themselves as mathematicians. Sara is one of them. I’ve seen her routinely defer to other students. “Oh, yeah, I thought the same thing as Giselle,” Sara will say when asked to expand on someone’s thinking.

Ezra is another. He uses humor to deflect his insecurity. Ezra will call out silly answers — accepting negative attention, and preferring a laugh from some of his friends. 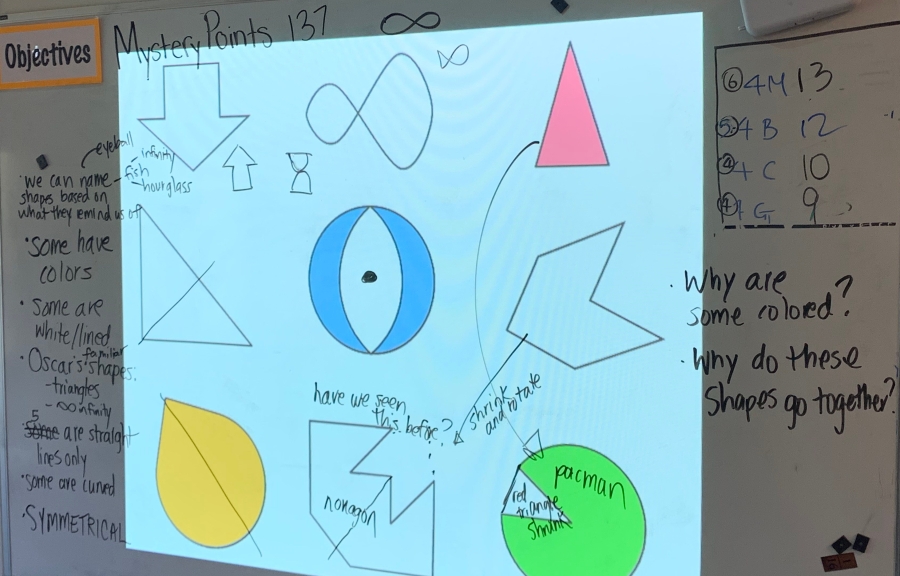 We launched the routine: what do you notice? What do you wonder? Ezra tapped his hand signal — the thumbs up — repeatedly on his chest. I called on him first.

“Why are some colored?” He asked. Arjun laughed, and Ezra snickered along.

“That’s a great question,” I responded, as I recorded it to the right of the board. “I wonder if the color means something.” Arjun furrowed his brows, and Ezra looked surprised that his idea had been taken so seriously.

I continued. “I think you were able to ask that question because you noticed something. What is it that you noticed, Ezra?”

“Um…that some have colors?” Maybe he thought I was playing a trick on him.

“Yes. Let’s right that down over here,” I said as I moved towards the left side of the board.

There were more students signaling now. I noticed Hannah among them. Hannah is legally blind, and she has some accommodations in the classroom. Perhaps most exciting for me is the addition of an Onyx machine — a camera and video magnifier with many features for accessibility. Hannah sits next to the machine while the other students sit on the rug so that she can zoom in on different parts of the board. Before her Onyx, I rarely saw her contribute any thinking in math class. Now, here she was, signaling with the rest of the class.

“Some are white. They’re just made of lines,” Hannah said, adding onto what Ezra had said. It was an important contribution — mathematically, and also in terms of building Hannah’s identity.

Students continued sharing ideas — about what the shapes reminded them of, about connections they made between these shapes and the recent work we had done with angles and parallel/perpendicular lines, and even visualizing ways these shapes fit together.

“Why do these shapes all go together?” One student asked. This is exactly where I had wanted to bring the class: that these shapes do have a feature in common. If a student hadn’t asked that question, I would have introduced the idea of a common feature to transition us to this thinking, especially since symmetry had not come up yet.

A few students looked puzzled. Sara bit the nail of her thumb. Ezra was starting to turn his body around towards Arjun, losing interest. A girl toward’s the back — Giselle — lit up, and shouted out her thinking impulsively, without signaling or stopping to form a sentence.

“Symmetrical!” Giselle called out. A number of students murmured “ohhhhh.”

“Yes, they all have lines of symmetry! Let’s talk about what that means,” I cued.

And so we did. Students were actually able to define it, pulling most of the intellectual weight throughout the lesson.

Following through with Problem-Based Instruction

Claire gave students very clear directions before they returned to their desks. Students were to work independently for 2 minutes first. (She elicited from them why it’s important to start working on your own first — develop your own thinking, have different ideas for the group to discuss, etc. — which is a conversation they clearly have had many times before.) Students then returned to their desk to work on the three prompts.

Claire and I noticed students using physical strategies to prove the line of symmetry. Some students cut out the shapes. Others folded along potential lines of symmetry, and held the paper up to the light to see if the sides matched. One student described an imaginary mirror. We wrote down exactly what he said on the left side of the board for other students to benefit from and build off of. 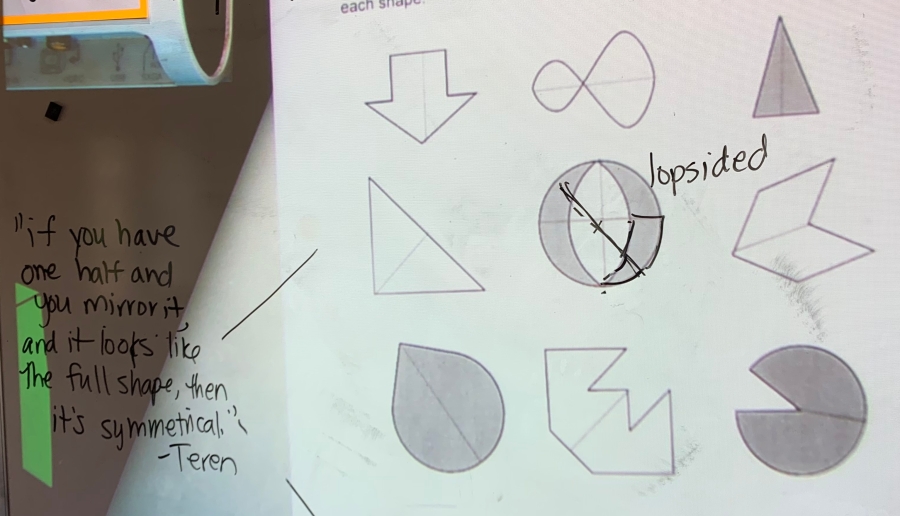 As the class worked, Claire and I chose several students to share their strategies and solutions. 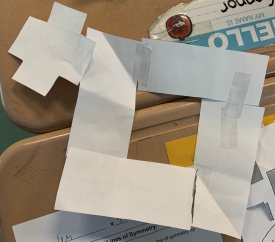 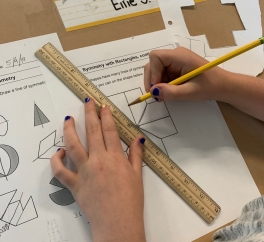 Most students focused on creating and using replicas, and folding. We saw students debating with one another whether certain shapes, like that tricky one with the rectangles, had lines of symmetry that “didn’t count” based on how the rectangles were joined together. The classroom was abuzz. After work time, Claire and I brought the students back to the rug for a conversation to consolidate the day’s learning. Every single student had been successful in some way.

Of course, we also saw that most students preferred to use strategies that involved physical manipulation. This is exactly where some of Claire’s former students had gotten stuck in previous years. Because Claire had already named this as a limitation in the past, we were able to plan for it in our mini-unit. The second lesson, about symmetry within triangles, would encourage — and perhaps require — additional strategies. You can read more about that in the blog post about Lesson 2 (published Wed, Jan 8, at 4pm)

More Resources about the Notice/Wonder routine:

*In my blog, I use pseudonyms for all students, and most adults. ‘Claire’ helped choose her pseudonym.