Have you ever had a student just gloriously prove all your assumptions wrong?

Things move so quickly in a school. In order to grapple with the pace of our days, and the sheer magnitude of decisions we must make every day as educators, we sometimes fall back on assumptions.

What assumptions do we make about our students? Some of these assumptions are based on their background — their race, where they were born, their home language, what kind of home they live in, their family structure, etc. These assumptions can be particularly dangerous.

When I feel like I’m at risk for jumping to conclusions, I try to return to low inference observations. I did this during a recent meeting with a first grade classroom teacher at my school. We were meeting to talk about one of her students, Juliet, who seems to be struggling in math class. How do we know she is struggling? Well…

Sometimes, during math class, 1st grade student Juliet looks perplexed — not puzzled in a good way, but full on bewildered. She looks like she’s been caught with her hand in the cookie jar, and she’s unsure what her next move will be. Juliet stares at the board. Her eyes dart back and forth. When Juliet is working collaboratively with peers, her eyes grow wide, and she stays silent. When Juliet is working alone, she blinks at the pages, and tries to flag down a teacher. She rarely completes a problem independently. When she does hand in something she completed independently, the numbers seem random, and Juliet cannot seem to remember how she arrived at her answers.

So Juliet is struggling in math class. But why?

Juliet’s first grade classroom teacher and I decided that I would do a series of clinical interviews with her to learn more. (If you’ve read some of my other blog posts — here and here — you may have figured out that this is something I love to do!)

I assumed we would see her needing to ‘directly model’ problems, and count from 1, which feels typical of a first grade student who is struggling.

I was so wrong.

First, we wanted to see what she’s thinking about number relationships, so the classroom teacher suggested I conduct the Kathy Richardson’s Hiding Assessment while the she observed.

The Hiding assessment helps determine whether a student can recognize the parts of a number (to ten), and see the relationship between composition and decomposition of numbers. This is central to many understandings in the primary years.

I started by showing Juliet 6 cubes.

How many cubes are there? 6.

I swished the cubes under my cupped hand, and let 2 spill out.

Juliet and I continued, uncovering the parts of 6, and then moving onto 7, and 8, and 9. Some of the parts for 9 weren’t as fluent, and she answered incorrectly for the first time when I showed her 3 (6 hiding).

Reflecting on the Hiding Assessment

Juliet was able to decompose numbers larger than many of her classmates, with great fluency. She recognized many number relationships, and demonstrated an understanding of addition and subtraction as inverse operations.

These weren’t the understandings of someone who looks helpless in math class.

Juliet’s classroom teacher is calm, warm, and inclusive. She likes to hear from as many different voices as possible during classroom discussions. I wouldn’t expect someone with such a robust understanding of how to decompose and compose numbers to struggle in this welcoming class.

We decided to try a second assessment: Kathy Richardson’s Ten Frames interview assessment. (You can see a sample video from the Assessing Math Concepts website.) The goal of this assessment is to determine whether the student can combine two single digit numbers by making a ten and some leftovers. This understanding of addition builds off first grade place value standards like:

One thing I like about the Ten Frames interview is the use of a visual to create an access point. Students are shown a ten frame with a set quantity, e.g. 9, and then asked to imagine adding 2 more stars. “Will that be enough to make a ten and leftovers?” Students then identify how many to make a ten, how many leftovers there will be, and the result. Later, students are asked to visualize these quantities mentally.

Juliet and I started with a ten frame card showing 9 stars.

I paused for a moment. Juliet had responded so quickly and confidently, not at all stumbling like we see her do in class.

If we added 2 more stars, would there be enough to make a ten and leftovers? Maaayyybe…?

How many more stars would you need to make a ten? 1.

How many leftovers would there be? 1.

We tried the next one, which involved a visual representation of 8 stars in a frame.

If we added 6 more stars, would there be enough to make a ten and leftovers? Yes.

How many leftovers would there be? 4. (I could feel my pace quickening. She was getting it!)

Maybe she was thinking about the 10 frame: if we put 6 in a new ten frame, we would need 4 more to get to 10. Then we would have a full ten plus the 8 from the original ten frame, which makes 18. Unfortunately, this was not at all the idea that we were trying to get at, so I decided to break from the script.

If I added 5 more stars, how many stars would that be?

Then we removed the anchoring image to do 8 + 3. Imagine there are 8 stars in a ten frame, and we add 3 more. “1, 2, 3, 4, 5, 6, 7, 8, 1, 2, 3… um…” Her understanding splintered without that representation. I think that if we had given her more manipulatives at this point she could have solved it, but the point was not to see how she arrives at the correct answer. We already knew she could do it with a single image in support. We needed to know whether that image was the critical tipping point for her understanding of addition within 20.

We continued to explore a few questions, and even tried some subtraction — some with the visual of the ten frame, and some without. The ones with the visual seemed successful. Then I tried one without a visual:

I repeated the exercise again, but this time showed her a full ten frame and another one with four additional stars.

Juliet moved the full ten frame to the side of the table.

Reflecting on the Ten Frame Assessment

Juliet’s classroom teacher and I felt even more confused during our reflection about the Ten Frame Assessment. “Sometimes she will use tools I give her to solve problems,” Juliet’s teacher explained, “like cubes. She’ll count every single cube, and sometimes she will get problems like 8 + 9 wrong because of counting errors. She will double count cubes, or leave one out.”

This was in stark contrast to the thinking Juliet displayed during our interview. The visual representations helped Juliet make sense of the problem, and then she was able to solve it without needing to tap or touch the quantities. It was an anchor.

Juliet’s classroom teacher and I decided that we wanted to come up with a support for Juliet that would be consistent and easy for her to implement on her own. We wanted her to own the strategy. She thrives on routine, and we do not want her to feel untethered just because the way the ‘math’ looks that day looks different.

We came up with a double sided graphic organizer that we placed into an erasable sleeve. On one side there was a double ten frame, and on the other there was a blank number line.

Juliet was able to pull it out for just about every lesson to use her whenever she felt like she didn’t have an entry point. This small, simple tool was able to jumpstart some big thinking. This is not to say that we never saw her staring off blankly during a lesson or during an independent task, or that she always used the tool — even when prompted. Perhaps the biggest change in thinking for us was how using a representation to anchor thinking can have more power than we know, and that small changes can deeply impact student sensemaking. 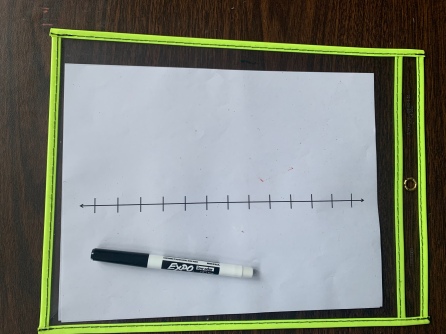 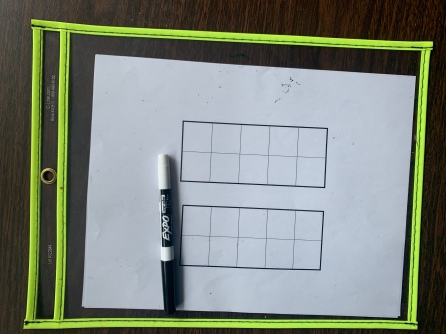